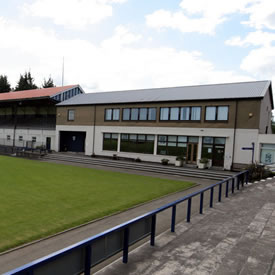 The Edinburgh Jazz ‘n’ Jive Club was founded in September 2000 as a means of providing local bands with somewhere to play on a regular basis. The original idea was mooted by Violet Milne (leader of the Spirits of Rhythm)and Norrie Thomson. Until December 2006, the Club organised weekly sessions in the function suite of the Fairmile Inn. However, without any warning, the venue closed down and left the club ‘homeless’. What seemed to be a bit of a catastrophe turned out to be a blessing in disguise.

In late December 2006, Heriot’s Rugby Club offered the use of the clubhouse facilities at Goldenacre, initially on a trial basis which has now been confirmed as permanent venue, at least for the foreseeable future. The room used in the modern, well appointed clubhouse is square in shape, has good acoustics and comfortably seats up 130 people has a good sized dance floor and is excellent for both listening and dancing.

The Club meets every Friday evening, sessions running from 8:00pm until 11:00pm and features a local bands each week with an occasional visiting band featured

The Club is legally constituted as a non-profit making body and is run a by a committee of three office bearers and four committee members.

The aims of the Club are to promote the enjoyment of live jazz in all its forms whilst at the same time providing a platform for local bands to play on a regular basis.

Non- members are most welcome.